Looking for a family connection to Scotland

McLamb connection with Maclaine of Lochbuie

Within this website you will find information on the clan itself, our history and a forum for discussion. Please don't hesitate to contact us if you have any questions.

As far back as 1549, Donald Monro, Dean of the Isles, wrote of the “Twa Clan Lynes”.  ‘The two groups are each divided into three separate branches. Siol Eacharn is made up of the houses of Lochbuie, Kingairloch and Dochgarroch, while Siol Lachlan (is made) of the houses of Dowart, Ardgour and Coll.”  During the reign of the Lords of the Isles both Lochbuie and Duart sat on the Council for the Lords of the Isles.... ‘In this Ile thair convenit...the Iles best barons, that is to say, four greatest of the nobles callit Lords; to wit Mcgillane of Doward, Mcgillane of Lochbuy... Thir Barons forsaid were haldin as Lords at sic time’. Both were regarded as substantial barons in their own right.

SIOL EACHAINN - THE RACE OF HECTOR

A complete guide to the Clan Maclaine of Lochbuie. The twenty six clan chiefs, their monuments and buildings, the legends, the branch clans and clan septs, their tartans, music and poetry, notable clansmen and facts not previously published.This compilation is essential reading for all kinsmen of the greater Clan Gillean of Lochbuie. Newly revealed history is based on Court and Privy Council records and supposition is replaced with fact. The Foreword to this book has been authored by the Herald of the Lyon Court.

ONE CLAN OR TWO?

The factually accurate history of the Maclaine of Lochbuie and the Maclean of Duart Clans.

ONE CLAN OR TWO ?: The feud between the Macleans of Duart and the Maclaines of Lochbuie 1100 to 1717.

Click on the image of the cover (to the right) to link to Amazon.

The Reverend James Gordon of Rothiemay, in 1644, wrote, “The whol Clan Lean ar devyded into two casts or trybs. Maclean of Lochbuy is called Seill-Eachin and the Clan Lean of Dowart in the Ile of Mull ar called Seill-Laughlan.”

First-hand accounts confirm that the Macleans are divided into “two consanguineous but separate groups”. A traveller, about 1630, identified these groups as “the Clan Gillean of Lochbuie or Siol Eachainn (the race of Hector) and Clan Gillean of Dowart or Siol Lachlan”.

When, speaking of Hector of Duart, historian, James N.M. Maclean notes, “This Hector was chief of his tribe at the date of the forfeiture of the Lordship of the Isles in 1493 when the Clan Lean was divided....” www.poms.ac.uk (People of Mediaeval Scotland)

As to the greater land issue, in a collection of papers, The 17th Century In The Highlands, edited by Loraine Maclean, Inverness, 1989 ,a detailed comparison of chartered lands the author says that “the statement that Duart originally obtained the greater estate is not entirely convincing.” Hector was granted lands in Mull in the late 1300s by the Lord of the Isles ... the grant included land on Mull, Scarba, Jura, Morvern, Locheil, and the bailliary of the south part of Tiree and of Morvern. Lands were also granted in Duror and Glencoe.... In 1542 the lands held by the sixth Lochbuie chief were united into the Barony of Maoidh.”

At no time did Lochbuie, Kingairloch, Ardgour or Coll acknowledge Dowart as their feudal superior or supreme chief: they owed allegiance to the Scottish monarch and nobody else. At no time did they surrender their feudal jurisdiction and property rights to Dowart. If they had ever done such a thing, then Argyll would have made more than a token gesture to seize their estates along with those belonging to Dowart.

As to the Lochbuies united with Duart under Clan Gillean, there is little substantiating evidence. J. Scott Keltie says in “History of the Scottish Highlands”, “in 1502, Lachlan Maclean, chief of Dowart and his kinsman, Maclean of Lochbuy, were among the leading men of the Western Isles whom that energetic monarch, James IV, entered into correspondence with...” John Maclean of Lochbuy and other Chiefs submitted to James IV ...their former possessions were confirmed by Royal Charter, and now, they held directly from the Crown and were independent of any overlord.

James N.M. Maclean wrote elsewhere... They owed allegiance to the Scottish monarch, and nobody else. At no time did any of them (Lochbuie, Kingairloch, Coll) surrender their feudal jurisdiction and property rights to Maclean of Dowart.
Hector, 8th of Lochbuie fought, in behalf of the MacDonalds of Islay, against the Macleans of Duart at the Battle of Benvigory 1598.  This is hardly the action of a Duart vassal.

Maclean of Coll even disputed the Macleans of Dowart claim that Dowart was “Head of the Clan Lean”, and insisted on being followed as “Chief by Maclean of Coll”, who held his lands direct from the Crown, declining to acknowledge Dowart, on the ground that, “being a free baron, he owed no service but to his sovereign as his feudal superior. At this refusal Dowart ravaged Coll’s lands and imprisoned his tenants. Coll succeeded in bringing the issue before the Privy Council who ordered Dowart to make reparation... and to refrain from molesting him in the future.”

In 1609, Duart appeared before the Lords Commissioners for the Isles and agreed to be answerable for all the inhabitants of Mull, except Mackinnon, Coll, and Lochbuie.  Nicholas Maclean-Bristol says, “If Duart was not to be responsible for them, he can hardly be regarded as chief of all the Macleans... Lochbuie did not follow Duart to support Prince Charlie. This was hardly the response of a Duart vassal; so obviously Duart was not Chief over the Lochbuies.  The Macleans of Lochbuie had temporarily lost control of their lands for a time after supporting the Old Pretender in 1689, and they had apparently learned from the experience.

Septs of the Clan:

Names associated with the clan:

DON’T ASSUME!
Contrary to popular and promoted publicity, the spelling of your name with “lean” or “Lean” does not necessarily indicate a Duart connection. Genealogical records demonstrate how scribes over time phonetically interpreted regional dialect.

The oldest recorded spelling so far located is 1296 when Gillemore Makilyn swore fealty to Edward I. of England. Hector MakGilleon of Loichbowe and Lachlan MakGilleon of Doward witnessed a charter by the King confirming David Lindsay of Buky as Earl of Crawford in 1478.  Time passes. In the 1609 bond of the principal Islemen we read McClane of Cole, McClane of Lochbowy & McClane of Dowart. The earliest record of ‘MacLaine’ spelling seems to be 1717.

So it’s only 300 years ago that the Lochbuie Chief’s family—in an effort to more clearly identify their separateness from the Duarts—took to spelling their name Maclaine. However, most branches and cadets stayed with the “lean” spelling. So, despite biased propaganda, “lean” usage does not  prove a Duart connection.


SEPTS
families who swore loyalty to “The Lochbuie”

This name originates from the Gaelic MacPhaidein (son of Paidin, a diminutive of Padraig [Patrick])—Though lacking evidence, the most popular story is that when Hector Maclean, elder son of Iain Dubh MacGillean (Black John) went to claim the lands granted to him at Loch Buie by the Lord of the Isles, he found much of the area partially settled by the McFadzeans. There are various stories: some suggest there was a challenge or display of skill-at-arms between Hector Maclean and the leader of the MacFadzeans.  Whatever the story, the end result was that MacFadzean acknowledged Maclean of Lochbuie the greater warrior and thereafter, his family’s feudal lord. For mutual protection (from various raiders and neighbouring tribes — including the Macleans of Duart — the MacFadzeans helped to strengthen and extend Maoidh Castle at the head of Lochbuie.
Contrary to popular claims, the MacFadzeans are not—nor ever were—followers of Duart.

From the Gaelic MacChormaig (son of the Charioteer) — So he could more easily usurp their land, Hector Mor Maclean (Duart) imprisoned John Og, 5th Lochbuie, on Cairnsburg Mor island, so he could not produce an heir. But to a servant woman, he fathered Murdoch Gearr who was secretly raised by MacGillivrays of Glencannel.   Murdoch (whose birth was legitimised in 1538) retreated to Ireland when Duart again attacked.  In 1540, the Earl of Antrim gave Murdoch, 6th Lochbuie, a boat and with a force of MacCormick warriors, recaptured Moy Castle.
Contrary to popular claims, the MacCormicks are not—nor ever were—followers of Duart.

John Huie was for many years Clan Commissioner for Queensland, Australia. The name is a contraction or anglicisation of the early Gaelic form of Macgillean Dhuibh. (Dhuibh=black or dark haired. So Duie or Huie is son of the dark-haired lad. 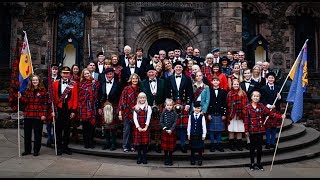 An interview with the Chief.

A New Generation of Clansmen

Check back soon
Once posts are published, you’ll see them here.
About

Origin of Name: MacGhille Eoin (Gaelic) - means "Son of the Servant of John". The clan takes its name from the son of (Mac) Gillean (Ghille Eoin).

Clan Badge: a branch of laurel and a branch of cypress in saltire, surmounted of a battleaxe in pale, all proper.

Progenitor: Gillean-na-Taughe (Gillean of the Battleaxe).